Earlier this month I had the privilege to meet and speak with Mayor Bloomberg at the Champions of Choice Luncheon. I am the co-chair of the Young Professionals Council for Choice, a fundraising and party-planning young professionals group that raises money for the National Institute for Reproductive Health, and so I wanted to introduce myself and tell him how our group appreciates his support on these issues.

I waited politely as he talked to a reporter from Vanity Fair and then introduced myself and a fellow council-member Jodi Leib and thanked him for his continued work and support for Women’s rights. He has a great handshake and introduces himself in a friendly, informal manner as “Mike Bloomberg” (I was thinking, yes, I know, that’s why I’ve been hovering around to meet you!). I also told him how he was the only Republican/Independent that I had ever voted for. (I’m a staunch liberal, S-T-A-U-N-C-H as Little Edie from Grey Gardens would say.) His response was interesting. He told me that all politicians are mostly the same and that I shouldn’t pay attention to the labels and should look at their specific positions instead. I have thought about it, and I mostly agree, though I’m still staunch.

And then he was whisked away…
Email me if you are interested in hearing more about the YPCC or the National Institute for Reproductive Health. You can sign up at www.ypccny.org or contact me to be on the host committee. 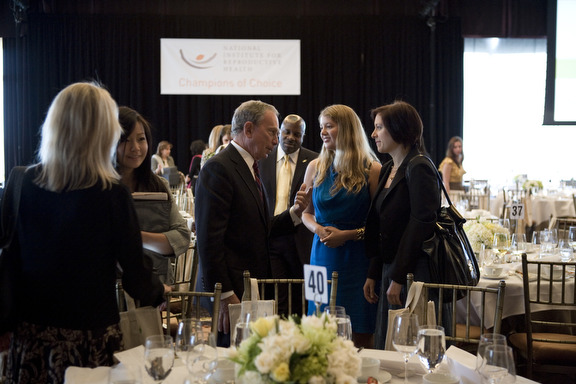