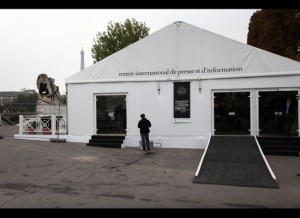 On the spur of the moment a trip was booked. Traveling with my friend Angelina, her Birkin Bag, GPS, wit, and a love for fashion, I’m now in Paris covering Fashion Week. I’m curious to see how I’m received at the last minute, what fashion and its people are like in the center of the style universe.

I’m writing this post in the Place Vendome, sitting on top of a parking garage. Where the cars enter and leave, I’m not sure – it’s one of the many mysteries of Paris I’m trying to unravel. In front of me is Chanel. Coco herself used to work there and live in the Ritz, conveniently located across the square. Although jewelry is now sold at the boutique, the main offices are just behind the hotel. There are small signs that say Valentino, Comme des Garcon – brass plaques that carry a century’s weight. Although landing in the City of Light, typing on Karl Lagerfled’s literal doorstep is a bit gauche, very American and maybe a bit brash. But this is a once in a lifetime opportunity.

Because of jetlag, I’m not quite sure if it’s today, tomorrow, or the day after. So I’m just going to jumble everything together into one big Paris experience. The people are stunning, dressed perfectly, taking casual chic to a whole new level. That H&M scarf on a Parisian girl with blown out hair and pouty lips looks like it cost a million bucks. I’m trying to figure out how to say, “Can I please take your picture so I can do a street style gallery?” I’m a bit scared of the fancy locals, armed only with a Bonjour, Merci and a D in college French. I’m also determined to kiss a cute French hipster before I fly away. 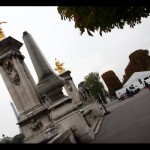 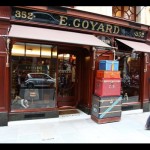 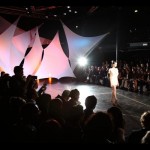 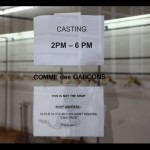 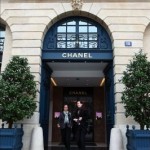 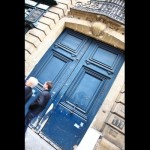 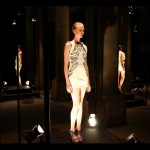 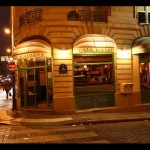 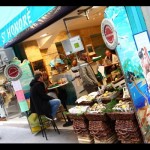 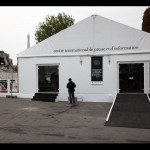 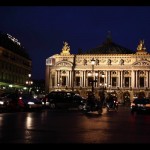 I thought it would be fun to cover Zac Posen on his first Parisian excursion; yet, I’ve already been rejected. I don’t think Zac wants anything to do with the New York press. Then again, who needs flouncy dresses and ruffles when I have Dior, Barbara Bui and Rue de Mail. Dior was the first to make room for us on their seating chart, and I get to witness the talented Pedro Lourenco who created a collection based on decay – Chanel, Alexander McQueen and other big names are in my sights: must wrangle and plead. Seeing Vivienne Westwood show a new collection would also be thrilling.

We traveled to a presentation in what can only be called the Parisian version of the East Village. Peering through a window, I saw a cute artist show off his work to a group of friends, while others hung out on balconies and smoked. There’s sushi and Ramen noodles: I catch a big pot of stock brewing in a window. At E. Goyard there’s a custom 2,200 Euro trash can for sale. Angelina tells me the only place you can buy the line in America is at Barney’s. I wonder, with so many European currency issues and political upheaval, how can they do it? Even though the wealthy might not be buying five of everything at a time, they’re at least buying two. Quality very much is the mantra of fashion, and the French live by it.

I’m staying at the Park Hyatt with some of the fashion folk. They’re scattered between The Ritz, Westin and other small hotels. Anna Wintour stays at The Ritz. Last night I hung out with Denning Rodriguez, a powerful fashion attorney at the hotel bar, and I had to say hi to Heidi Klum who looked stunning. I said I loved watching her walk. Leonardo Dicaprio was hanging out with a friend. Some famous guy I couldn’t recognize was in the corner. 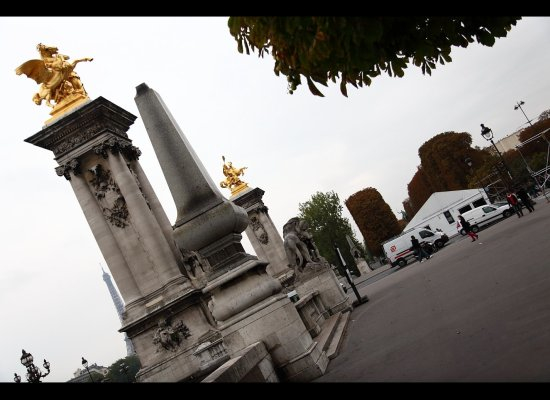 There are fewer shows in Paris, or at least that I can find – probably because it’s my first time. Yet, the shows themselves are powerful and cause waves in the way we think about our look and feel, the way we perceive ourselves. My first stop was at the accreditation office to see if I could plead my way into a press pass (we had missed the deadline by a month). The surly kid, according to my friend with a better understanding of the language, breathed “idiot” under his breath and balked at the thought of a website getting access to the shows. Yet invitations are slowly trickling in, and even his coworker, when she saw the small commotion, came over – she’d heard of The Huffington Post, so now I can say the site’s reach is truly global. She sighed, “We’d love to consider and accommodate you with a press pass next time,” and then encouraged me to meet the deadline. After all the accreditation process is governed by a 1940s law, far before the birth of the online press and unruly bloggers.

We saw our first presentation at the Palais-Royal. Arzu Kaprol showed great dresses with mirrored straps. They served some great nibbly things and real champers. The really cool pictures are in the gallery, and I’d be able to describe the clothes better if I didn’t feel like I was in a time sucking vortex. We couldn’t stay long, unfortunately, because of a conflict. The French aren’t into sponsors and fashion – that whole mix – but then again, the French government pays for everything. Mercedes-Benz still has a presence, though, with private cars for very fancy people. Also Canon provides support from the accreditation tent.

To walk streets and alleys steeped in history, to think of the many lovers, kisses and duels, the protests and the blood; the kings and queens, walking on the cobblestone streets; all this nearly blew me away on arrival. Jet leg almost caused me a bit of a cry. It’s like walking around in a movie. The biggest difference between New York and Paris is that the scaffolding is less abundant, if not non-existent. You can see the city as you stroll. Food is taken just as seriously as Fashion and we’re hoping to get one good meal in, but right now I’ve just discovered the sustaining power of butter.