Hell is being trapped in a luxury hotel room unable to do more then call room service for porridge and chicken soup. Finally the house doctor came — Sunday morning — sporting a salmon Ralph Lauren sweater, and pronounced that I had strep throat. This childhood aliment that normally has little to do with the adult world floored me. I’m of hearty stock and have plowed through many a minor discomfort, but at one point in my current delirium I almost forgot it was Fashion Week.

While watching Haider Ackermann’s powerful show, all I could fixate on was the hair extensions – like katanas, they sliced their way down the models’ backs. Can I reach out, steal one, and perform hara-kiri in the marble bathtub? Is that possible? I’m already a fashion victim; let’s take it one step further.

Right next door was Tsumori Chisato. I had my head in my lap. Finally the lights dimmed and all my energy went into noticing the bubbly pop prints of childish tigers and dreamy elephants blend with sequins and sailor hats. Don’t even try and convince me she didn’t get inspiration from the musical 42nd Street and hallucinogenic drugs. I stumbled out to my room and Angelina stared blankly at me, wondering if I’d contracted a parasite from the salami I kept in the mini-bar. 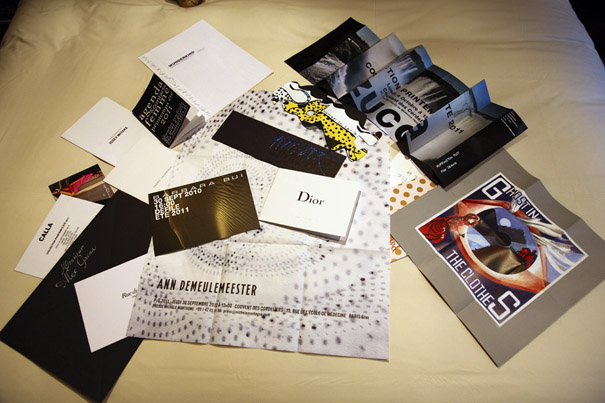 If I weren’t comatose, watching the delightfully intimate Azzaro presentation would have been one of the trips highlights. It was a show from fashions past, wherein two models alternated between dressing rooms in the top floor of the designer showroom, each walking a few feet on a section of floor, while assistants proudly showed off shoes and accessories. Think I Love Lucy — that episode where she goes to a French parlor to have a dress done. Reflected from all angles in the mirrored showroom, the clothes were perfectly flirty, feminine and just demur enough to go from office to evening flawlessly. Sadly, all I could think about was, “can someone move over on the couch” and “the macrons are awful” (tastebuds were so not working), and, most telling of all, I had actually forgotten my camera.

So these many symptoms lead to the doctor’s visit, who happily prescribed me antibiotics to kill everything, probably enough to kill every germ in a 10 foot radius of me. I’m not sure how much his service fee is — I’m afraid to look — but the pills were quite affordable. Roughly forty dollars for everything: from the antibiotics to the anti-inflammatory something-or-other, to the fever reducing stuff. It’s frankly cheaper to be sick in Paris.

At Zucca I waited in line by the church doors, only having been granted standing. I tried to plead my case to at least wait inside. I didn’t want to run away from a show I’d been invited to; but, the publicist would have none on it. That’s when I had headlines flashing in my dream state: “FAHION WRITER DOWN!” I could see them wheeling me off the steps in a gurney and everyone mumbling something about stupid Americans. This is when I accept defeat and wait to heal.

My normally unboundable energy escaped me. I had a plan, a strategy of sorts, especially when I realized that most everyone does their press “in house.” There are very astute press agents at the gates, but you can only reach them at the offices at the Place Vendome. I was going to walk door to door, plead my case — chain myself if I had to — until they’d gave me a seat. Brash? Yes. Effective? Maybe. But all I could do was relentlessly make calls and have my editor poke KCD. So my own drive was left by the wayside and others tended to my fashionable needs. Anna, can I borrow one of your assistants some day? That would be awesome. I love exploring; in Paris, every corner is a new discovery. But to do this you have to leave your room. Instead, I had a chance to see two episodes of Family Guy — the French seem to like their American TV. Bristol (of Law and Order fame) has an odd Parisian accent.

Paris leaves me with a deep feeling of sadness and loneliness because never have I come so far and been so close, yet in the same moment, so disconnected from what I could accomplish. Finally I found myself on the mend. The words to write have come back to me. Once again I’m able to taste a macaroon and relish it, to properly avoid flavorless chicken soup and not consider it the most perfect dish.

So ends my lackluster experience, but that doesn’t mean I don’t want to come back, or that I don’t want to spend some serious time learning French when I’m home. It is a lovely city. I just wish I got more out of it. But my normally stalwart body failed me, so I can’t give you true insights into the city’s fashion landscape because I just haven’t seen enough shows.

And now….off to the Moulin Rouge for a final farewell.