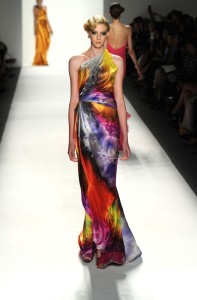 There were no shortages of “ooohs” and “aaahs” from the audience at Venexiana’s brilliant Spring/Summer 2012 catwalk show Saturday night at Mercedes Benz Fashion Week. High fashion designer Kati Stern sent out an absolutely stunning and ambitious collection of 72 exquisite evening and cocktail dresses punctuated with sparkling sequins, Swarovski crystals, beading and cast in flowery tones like tangerine and fuchsia.
The black and white polka dot sweetheart strapless gown would easily please 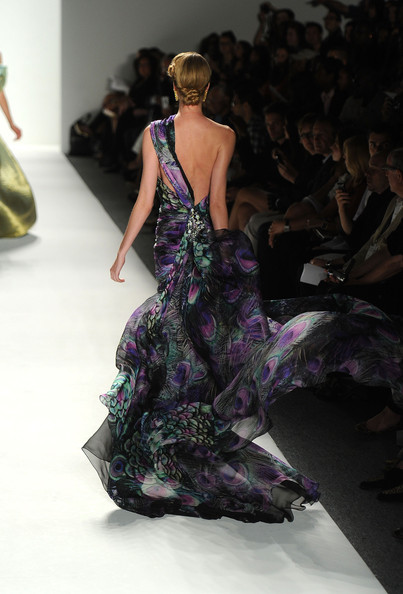 the designer’s punk-rock-princess fans. A green banana organza dress with Swarovski detailing and cascading ruffly offered sweet grandeur for her high-end clientele, which included front row attendees bestselling author Jackie Collins and  Real Housewives of New York stars Alex McCord and Simon van Kempen. For some dresses, perilously plunging back-lines were held together by a single strand of crystals. For others, the backs just plunged deep, leaving me to wonder how they even managed to even stay up on the models’ frames. A former architecht, Stern has obviously figured that out and made it work tremendously in her designs. Another masterpiece was a swanky one-shouldered sequin gown that looked so fluid when the model walked, as if it was painted on. It, too, featured a thrilling backless cut. 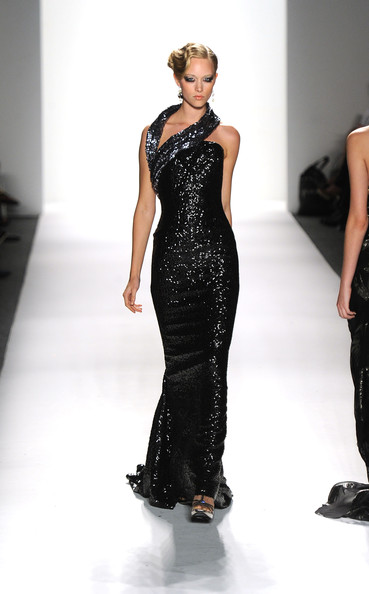 It would be difficult for me to pick a favourite look since Stern served up a delectable assortment of dresses with no detail or luxury spared. The designer stayed true to her signature look, effortlessly mixing rockstar “couture” with romance and high fashion glamour. One could easily picture this wardrobe for a modern-day Scarlett O’Hara — a brazen, tough girl with an appreciation for luxury and a burning desire to be the the best dressed and most wanted at the ball.  Influenced by the 1920’s flapper mode, models wearing smokey eyes with exaggerated lower lashes, glossy nude pouts and finger waves paraded down the catwalk to a thumping rock ‘n roll soundtrack. Venexiana’s final look, a strapless white silk taffeta gown with china blue flora print and a dramatic train, took my breath — and everyone else’s– away. And isn’t that the reaction we all want when we wear a beautiful dress, anyway? 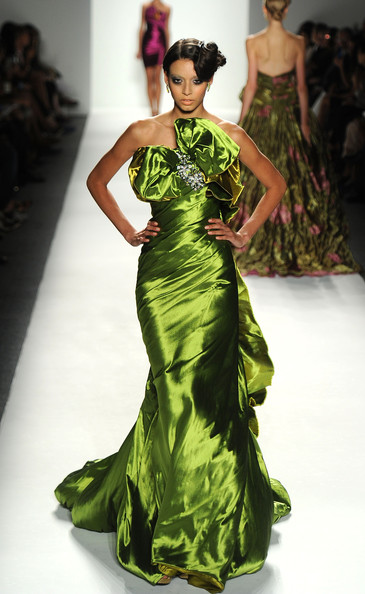 The Lifestyle Lounge: Welcome to Wellness