Ladies, will you join us for Relief On The Runway on Saturday April 28th?

I am thrilled to MC this chic charity event, for women only, which will support Islamic Relief USA’s programs benefitting women all over the world. Their top-rated programs include clean water initiatives in Mali, Yemen and China, Vocational training for orphans in Afghanistan, Emergency Livestock intervention in Ethiopia, Educational programs in Africa and across the middle east, Food Aid programs in Egypt, Lebanon, China, the United States and many other countries, as well as dozens of other life-saving, inspirational programs in the areas women need them most. Tickets are selling out fast as they are extremely reasonable at only $40 for a luxe evening. 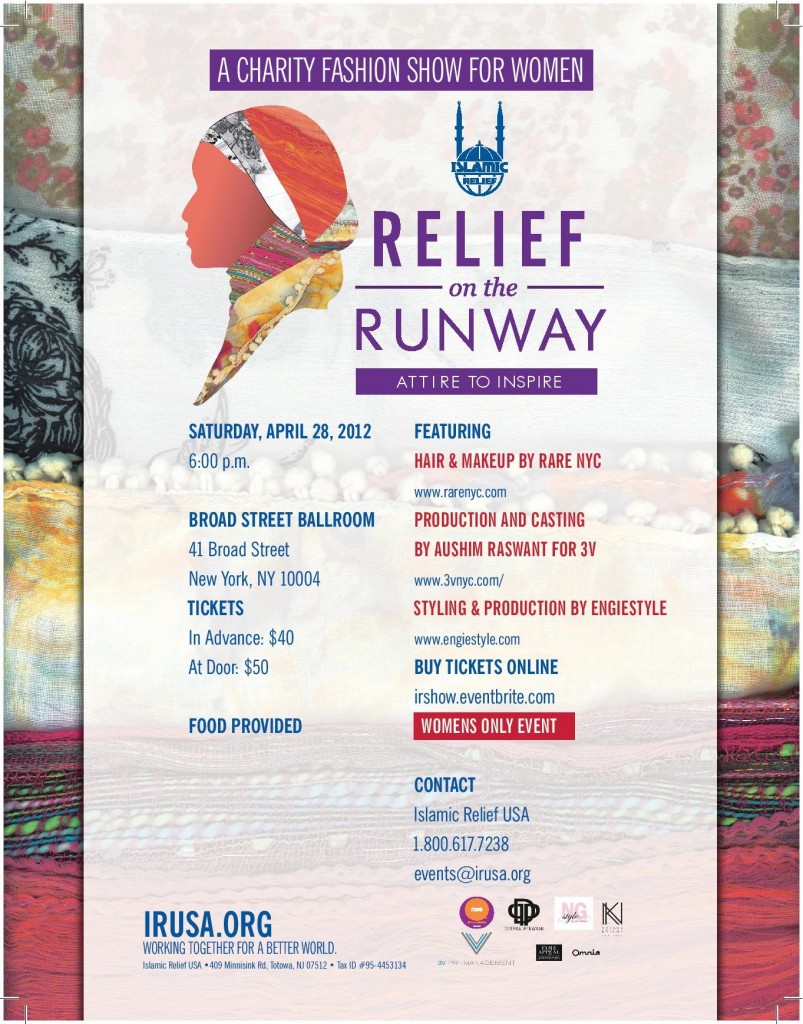 Styling and Production by Engie Hassan of EngieStyle. Hair and Makeup by Rare NYC.  Proceeds will go toward Islamic Relief’s programs benefiting women.

What: Islamic Relief’s Relief on the Runway Charity Fashion Show

Islamic Relief USA, based in Alexandria, Va., is a nonprofit 501(c)(3) humanitarian organization with eight consecutive 4-star ratings from Charity Navigator. Its mission is to alleviate suffering, hunger, illiteracy and disease regardless of color, race, gender or creed, and to provide aid in a compassionate and dignified manner. In 2011, Islamic Relief USA benefited more than 6 million people in 34 countries, including the United States.  In addition to its 4-star rating on Charity Navigator, Islamic Relief USA meets all of the Standards for Charity Accountability of the BBB Wise Giving Alliance, a national charity monitoring group affiliated with the Better Business Bureau system. Islamic Relief USA is listed on the U.S. government’s Combined Federal Campaign (CFC) charity list, and it is also a signatory to the code of conduct of the International Federation of Red Cross and Red Crescent Societies.

A Worldwide Leader in Alleviating Poverty |