Where Magic’s Most Famous Names Secretly Gather: WONDERSHOW at the Cutting Room 12/29

Have you heard about Wondershow? Every month or two the best magicians, mentalists and physical acrobats in the world gather as performers and audience members for an intimate crowd – TV stars such as David Blaine support rising stars who are winning magic’s top prizes, such as Merlin Award Winner Asi Wind. Female magicians such as Cassandra Nemzer and alternative physical performers such as Jonathan Burns are given a platform to amaze and inspire new generations.
Have I captured your interest? 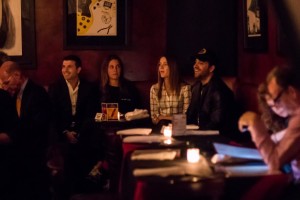 Acts of Magic, Mischief and Mystery

New York, NY. Dec 2015 – Award winning producer Patrick Terry returns to The Cutting Room with a line up of today’s best magicians and variety artists! For one night only, don’t miss incredible performances by the one and only MASTER LEE (Conan O’Brien), as well as Bronx native ELLIOT ZIMET (America’s Got Talent), Plus outrageous comedy from Tonight Show alum JONATHAN BURNS, and a special appearance from New York’s Enchanting Songstress CASSANDRA NEMZER (Carnegie Hall) and much more! 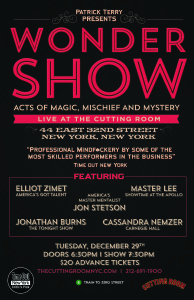 Presented exclusively at Manhattan’s beautiful CUTTING ROOM, owned by CHRIS NOTH of the Good Wife and Sex & The City, WONDERSHOW is an experience like no other – and will showcase the best in underground talent, as well as established professionals, like headliner, JON STETSON: America’s Master Mentalist. As one of today’s most popular entertainers, Jon has appeared on major networks and in major venues around the globe, not to mention private shows for The King of Sweden, The New England Patriots, and multiple Fortune 100 companies. His extensive television credits and thousands of live shows combined with a razor sharp sense of a humor guarantee that you will never forget ‘The Stetson Experience.’

And as if that wasn’t enough, WONDERSHOW creator, PATRICK TERRY will serve as the Master of Ceremonies chaperoning the night’s spirit of all things astounding and confounding. But arrive early to enjoy drinks and delicacies from the full bar.

Don’t miss what TIME OUT NEW YORK calls, “Professional Mindf*ckery by the most skilled performers in the business. ” as it continues to be the city’s most exciting destination for  magic, mischief & mystery. 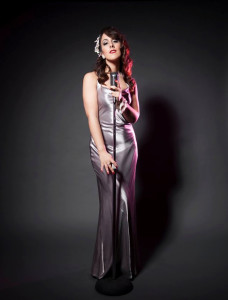 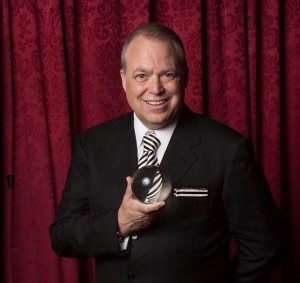 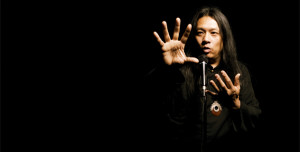 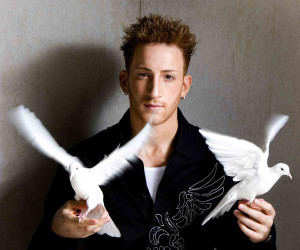