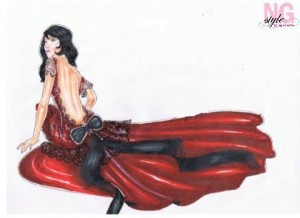 Get your ticket today or on Tuesday before 4:30pm to be sure you get in!

On June 8th at 8pm the international fashion stylist Engie Hassan and the NYC social club and online magazine The Women’s Mafia will present “Once Upon A Time,” a fashion presentation to benefit the New York Restoration Project’s (NYRP) MillionTreesNYC initiative.

The fashion presentation will showcase EngieStyle’s premier collection, “Rouge et Noir,” as well as the work of other featured New York designers. The official launch party for EngieStyle, a fashion styling, personal shopping and image consulting company started earlier this year, will follow the presentation and will include guests of the Women’s Mafia, the NYRP and Engie Hassan, Vogue alum and top stylist to royalty and celebrities.

Following an introduction from Marcy Clark, founder of the Women’s Mafia, the presentation will unfold as a fashion fairy tale: a glossy magazine spread come to life with Hassan as raconteur.  The highly theatrical presentation, Creative-Directed by Hassan and co-produced by the Women’s Mafia, will present scenes from Engie Hassan’s life in fashion, featuring EngieStyle and Women’s Mafia endorsed designers Shauntele and Ananda Khalsa, and culminating in a preview of EngieStyle’s debut collection.

The Fall/ Winter 2011 EngieStyle Collection by Engie Hassan and collaborator Sam Lavey, utilizes contoured silhouettes, delicate and rich fabrics and the passionate colors of the 1930’s and 40’s, to create a defined wardrobe for the contemporary woman of today. Says Hassan: “My collection is inspired by the modest, classical style of the stars and starlets of the bygone Golden age of Hollywood. With ‘Rouge et Noir’ we seek to capture an aesthetic of extreme elegance, uniqueness and distinction. Cherishing timeless chic in a fast paced world.”

Officially launched by Mayor Michael Bloomberg and NYRP Founder Bette Midler in October 2007, MillionTreesNYC is an initiative of PlanNYC and is a public-private partnership led by New York City Department of Parks & Recreation and the New York Restoration Project.  The MillionTreesNYC initiative has set the ambitious goal of planting and caring for one million new trees across New York City’s five boroughs by 2017.

“We share in NYRP’s mission of beautifying and enjoying New York City and we are proud to support their efforts to reclaim and restore New York City parks, community gardens and open space.” Says Women’s Mafia Founder Marcy Clark.

Yellow Sky Agency PR will provide pre- and post-show coverage for all parties involved.  Guests will include top editors of all major fashion publications, buyers, stylists, and a star-studded mix of international royalty, celebrities, socialites and top models.  Wendy Levene, of Fenton Moon Media and Co-Chair on behalf of NYRP, will serve as associate producer.

Launched in 2005, the Women’s Mafia is founded on the idea that a large group of women getting together is, in and of itself, a powerful thing. The mission of the Women’s Mafia social club and online magazine is to support emerging and up-and-coming designers, artists, small businesses, products and charitable causes, while hosting remarkably unique, special and highly valuable social and networking events for members. Through the online magazine www.womensmafia.com Women’s Mafia editors cover top tier fashion, lifestyle, art and beauty stories for members and readers in New York, LA, San Francisco, the Hamptons and around the world.