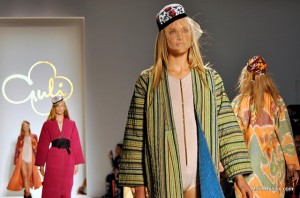 Is Uzbekistan the next fashion capital? Gulnara Karimova is working hard to make you believe so.  An Uzbekistan ambassador who works with several charitable organizations in that country, she showed a collection that demonstrated what it had to offer.

While Ikat patterns have been on many major runways this year, the Guli brand demonstrated the true Ikat fabric, including a romantic mythology of its origin.  The fabric was traditionally an artisanal textile of different weighted silk yarns.  The pride of heritage was showcased in traditional techniques and embroideries, but with contemporary silhouettes.

Accessories included the Guli jewelry collection that resulted from a collaboration with Chopard.
The designer’s background was originally in politics.  At times, I was not sure if this runway presentation was intended to be marketed to retailers directly, or a diplomatic excercise to announce the country overall as a fashion player.  The clothes had an International flair, and maybe not quite the taste of the urban New Yorker.  My colleague from the West Coast heartily disagrees, and is ready to buy the menswear right now. 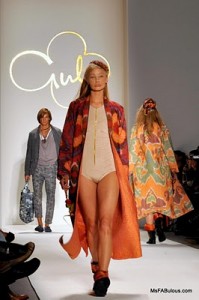 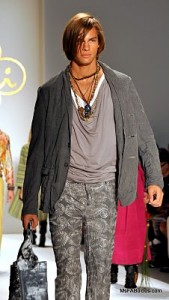 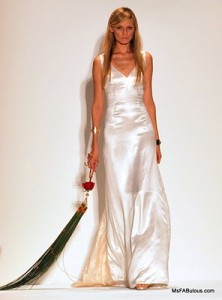 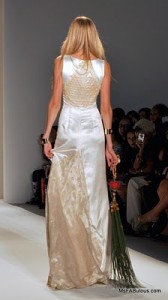