This September 9th at 6pm, the fashion cognoscenti will be joining us for our signature New York Fashion Week Event at Tela Design Studio.

The Women’s Mafia NY Fashion Week Show will feature the winners of our “Are You Runway Ready?” Competition Dominique Auxilly, Phuong My, Priestess NYC by Cody Ross. 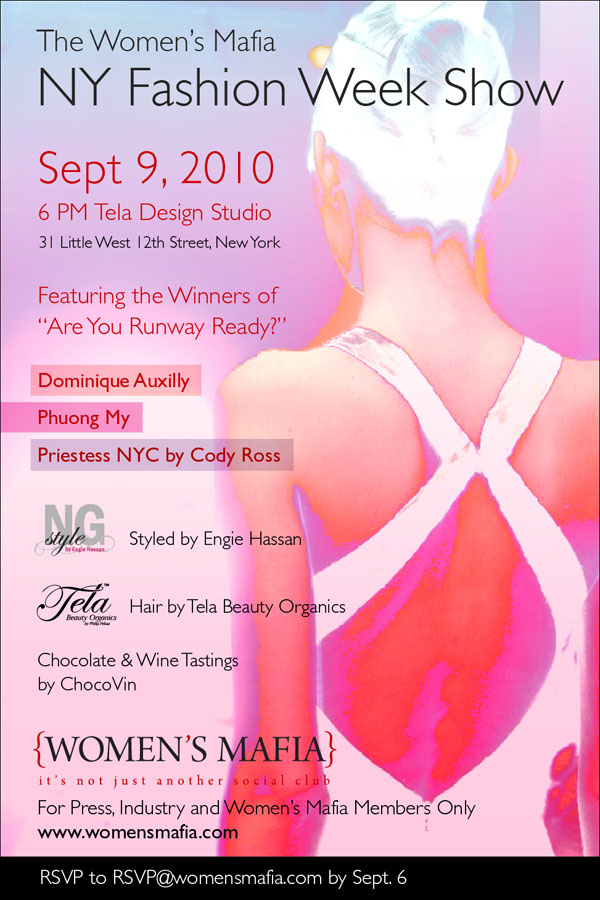 New York, NY. September 2011 – Once again, the Women’s Mafia and Marcy Clark are hosting an un-missable New York Fashion Week event. This September the Women’s Mafia Fashion Show will feature the winners of their signature “Are You Runway Ready” contest, in an exclusive show at Tela Design Studio in the Meatpacking District on September 9th, 2010 at 6pm.

PRIESTESS NYC by Cody Ross, is a line celebrating directional fashion, artisanship, subversive tendencies, extravaganza and fun. His label already has a certifiably cool fan-base and cult-following including Natalie Portman, Juliette Lewis, Elly from La Roux and Björk and to name a few. He vigorously designs and curates PRIESTESS NYC – an avant-garde womenswear/unisex label (launched in 2008) that has tons of edge, sex-appeal and artistic “fabulosity.”  The PRIESTESS NYC atelier is located in the West Village, NYC.

PHUONG MY, a San Francisco based designer, will make her New York Fashion Week debut with the Women’s Mafia. Known for her exquisite hand-sewn work for private customers in California, she creates garments for women who love to look beautiful all the time. All her garments are delicately beautiful and designed to fit and perfect the body form. She loves to drape fabric to play with form and shape to express different ways of the silhouette.

DOMINIQUE AUXILLY taught herself to sew at the age of 16 while attending Fashion Industries High School in NYC, majoring in Fashion marketing. She then continued her studies in Fashion Marketing at L.I.M College in NYC while designing custom dresses at home. She gained a clientele by wearing her own designs to parties. Dominique Auxilly has been worn by Nicki Minaj, Angela Simmons, Dawn Richards, Rocsi, host of 106 and park and Def Jam recording artist, Electrick Red, and has been featured in various print and online magazines.

Guests of the event will enjoy Chocolate and Wine tastings by ChocoVin, a collaboration between two Women owned business – Luxx Chocolat and Winerium. The theme of the tastings will be “Edible Couture.” Our event hosts, Tela Design Studio, the home of Tela Beauty Organics (the 1st FDA certified organic hair and skincare line) by celebrity stylist Philip Pelusi, will provide coveted gift bags and exclusive perks for guests. Makeup for the show will be provided by Smashbox and the signature looks created by Makeup By Leora.

The show will be styled by Engie Hassan of EngieStyle, a fashion styling, personal shopping and image consulting company. Engie Hassan, a Vogue alum and top stylist to royalty and celebrities, launched her eponymous fashion line with the Women’s Mafia in June 2010, with great critical success.

Launched in 2005 by Marcy Clark, the Women’s Mafia is founded on the idea that a large group of women getting together is a powerful thing, in and of itself. The mission of the Women’s Mafia social club and online magazine is to support emerging and up-and-coming designers, artists, independent and ethical businesses, products and charitable causes, while hosting remarkably unique, special and highly valuable social and networking events for members. Through the online magazine www.WomensMafia.com Women’s Mafia editors cover top tier fashion, lifestyle, art and beauty stories for members and readers in New York, LA, San Francisco, the Hamptons and around the world.

Will we see you this upcoming Thursday Sept. 9th?
Please note RSVP’s are required and the guest list will be strictly enforced.