Smooth hip-hop crooner and tap dancer AC Lincoln is giving us a treat this February 15th. All the attendees of his post-Valentine’s day Rebound Concert will enjoy an exclusive preview of two new songs off his upcoming album and receive a free download to remember the night by. Will we see you there?
RSVP to Michael.F.Kaiser@gmail.com 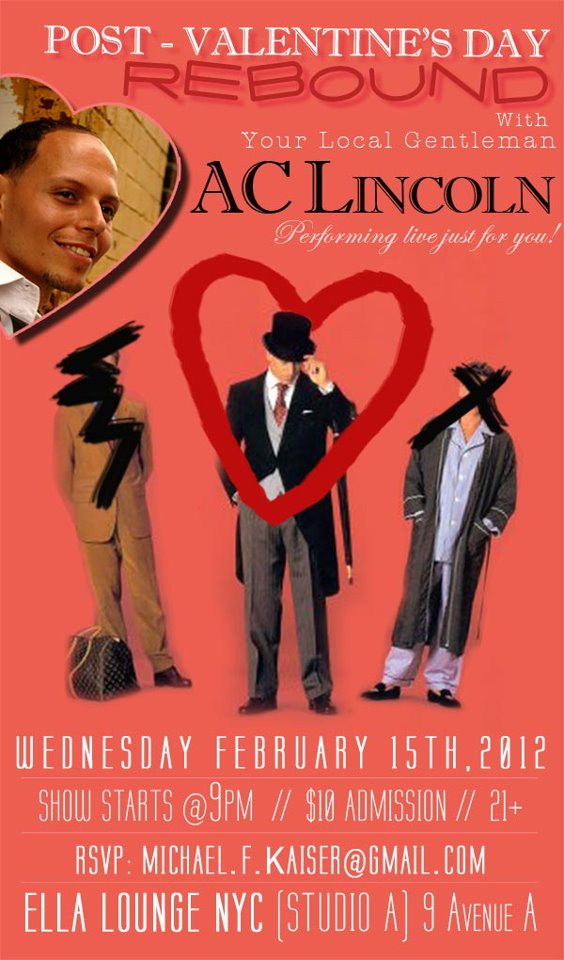 Born on the Island of St. Croix, in the middle of his parents’ tour of the US Virgin Islands, this multi dimensional R&B singer, Composer, Producer and Tap Dancer began his career at an early age. Known for sultry and smooth vocals, groove-driven rhythms and an electric, dynamic stage presence, AC Lincoln has been traveling and performing with his family of acclaimed Jazz and R&B singers his whole life.

Raised in New York City, Alex or “AC” discovered at the age of 5 an affinity for moving his feet to the beat of a drum. After receiving a special gift of tap shoes from his family, this young impresario quickly became popular on the NYC tap scene sharing the stage with the original “hoofers” of the time and Tap legends such as Peg Leg Bates, Jimmy Slide, Savion Glover, Buster Brown and Henry Latang. With his definitive style and refined stage presence, AC was soon traveling the world playing festivals and concert halls all throughout his youth. He has headlined a Gala for the NAACP, the Caramoor Jazz Festival and top NY Venues such as The Jazz Standard, Smalls, The Bitter End, Rockwood Music Hall & The Cotton Club.

Currently you can find AC Lincoln captivating audiences with concerts produced by his own Entertainment label, Jive Life Ent. With his rich vocals and undeniably catchy energetic original songs, it is impossible to deny this force of creativity and natural innovation. With much in store for this year, including a full length EP “Mr. International” and an East & West Coast Tour, there is much to look forward to from this multi talented entertainer and producer.