Come see the show that Time Out New York called “Equally HILARIOUS and HEARTBREAKING!”
WP THEATER (Women’s Project Theater) is the nation’s oldest and largest theater company dedicated to developing, producing and promoting the work of female theater artists at every stage in their careers. For $35 individual tickets use code STUFFED35 with your members and tickets can be booked on line or by phone at 212.765.1706.
“VERY FUNNY and AFFECTING!”  —The Hollywood Reporter
“Now that Joan Rivers is gone, no one in comedy is stomping on sensitivities as consistently as Lisa Lampanelli.”  –New York Times 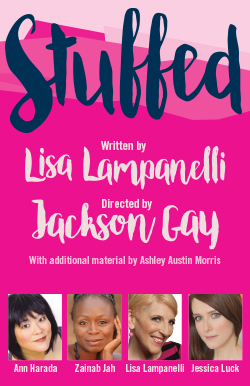 NOW thru November 6th starring Ann Harada, Zainab Jah, Lisa Lampanelli, Jessica Luck
A bulimic, a compulsive eater, a confident overweight gal, and a chronically thin chick walk into a play and… what happens next could only be told by comic mastermind Lisa Lampanelli. With signature wit and razor-sharp insight, Lampanelli’s famously irreverent voice comes to the New York stage with Stuffed, bringing together four women’s disparate stories to paint an acerbically witty and ultimately poignant portrait of the insanity of a world that forces women to address hard-hitting issues like: Is eating an ice cream sandwich in the shower an emotionally fulfilling activity? When it comes to blue jeans, should one opt for a camel toe or a muffin top? And the ultimate question: can food and body-image issues ever truly be conquered or are we all just destined to be Stuffed? 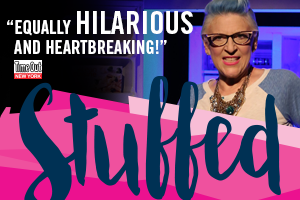