I have good news. Magic is cool again. Hip, young and handsome magicians such as our friends “Vanishing Vinny” and Patrick Terry are bringing a suave, contemporary vaudevillian aesthetic to this timeless craft. Patrick Terry is producing “Mysterious Delights” starring Vanishing Vinny at Galapagos in DUMBO on Sept. 30th. Enjoy the Women’s Mafia TALENT Q&A below and RSVP to me for a special rate… 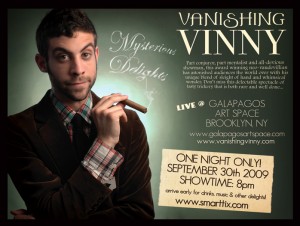 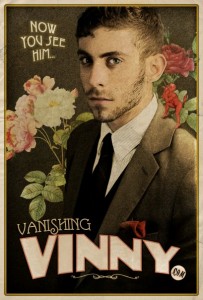 Vanishing Vinny – Mysterious Delights PromoCard
WM: Soo… You are a bit cuter than your average magician – do you have groupies? Do you want some?
VV: Awww! Well thank you!
Sadly I don’t have groupies unless of course you count that one time after my high school talent show when my friend’s mom… actually that’s probably not appropriate.
Anyway, groupies would be nice. Wanna help with that?

WM: How old were you when you learned your first magic trick?
VV: I was six when my father finally taught me the vanishing hanky trick that came from his fathers old shoebox o’ tricks. Although he wouldn’t tell me for weeks he finally let me in on the secret. From then on, I enjoyed annoying my family. I still do. It’s great.

WM: You are known as an expert in illusions – what is the biggest thing that you have made disappear?
VV: The biggest thing I’ve made vanish besides my chances at being America’s next top model (long story), would probably be my six cast members from my last show. We all got into a cabinet and disappeared – it was fantastic. Oh and also my afro in the 90’s. Don’t ask.

WM: When did you realize that you could take your love of magic and make it a career?
VV: Just now! Thanks!
You girls have got some great ideas!

WM: Please don’t hold back now – what is the funniest thing that ever happened to you on stage?
VV: I would have to say when I brought up a 7 year old kid on stage and purposely stepped on her balloon animal dog while yelling “play dead”. She gave me a mean look and ran off stage. I then magically brought it back for her (I’m not that heartless) and she took it from my hands (still with a mean look and squinted eyes) and told me that it wasn’t funny. This girl is my set designers daughter and is currently in my new show Mysterious Delights on the 30th. She & her sister are quite talented and quite hilarious.