TALENT: Q&A with Jayne Amelia Larson, Playwright and Star of DRIVING THE SAUDIS

DRIVING THE SAUDIS is an extremely engaging and entertaining one-woman show based on Jayne Amelia Larson’s real life experience as a chauffeur for a family of Saudi Royals visiting Beverly Hills for 7 weeks of shopping and plastic surgery. 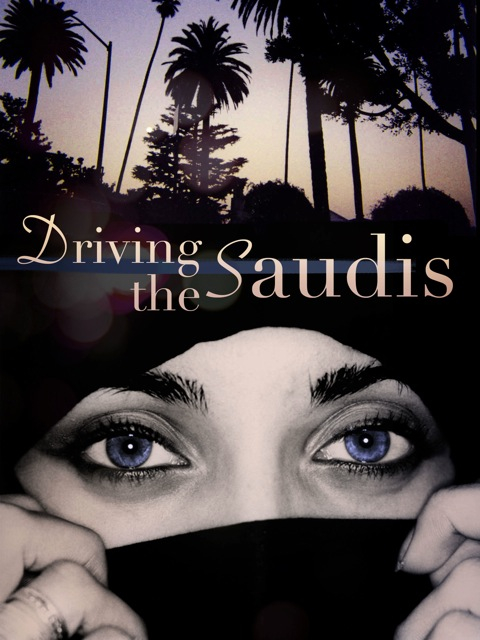 “It’s a story that sounds almost too incredible—the kind you’d eavesdrop in on at a restaurant. ‘The worst job I ever had,’ is how actress Jayne Amelia Larson describes being a chauffeur in Beverly Hills. Not just an ordinary chauffeur. But a driver for vacationing Saudi royalty.” – Memphis Commercial Appeal

Enjoy our exclusive Q&A with Jayne Amelia Larson below and book tickets ASAP for her March 29th and 30th performances at Galapagos before they sell out!

WM: Your play Driving The Saudi’s plays on some heavy themes regarding the subjugation of women, how has the experience changed or informed your view in terms of American pop culture?
JAL: I was struck by the fact that all the young Saudi women (as well as most of the African, Arab, and Pilipino servants of the family) are obsessed with American pop culture. They know all the top songs, newest fashions, latest limited edition sneakers, what new movie is out (always PG-13 or lower, they’re not allowed to see R movies) and who’s starring in it, the name of Paris Hilton’s favorite accessory dog (her Chihuahua Tinkerbell), etcetera. At home in their own country, they can’t explore and experiment the way we’re free to do here and they just absorb as much of our culture as they can. Their life at home is so terribly confining, no movie cinemas, no concerts, no plays, nothing that’s a shared experience.  It’s made me look with a new appreciation of how we live—being exposed to the creation of new things every day and the freedom to be the creator as well. We have so many choices and so much opportunity. Recently a 13 year-old Saudi girl was sentenced to 90 lashes in front of her classmates for being caught with a mobile camera phone in school. Phones are forbidden in the girls’ schools because it’s one the few ways young men and women can communicate. They share pictures and music and ideas, just like kids do here but they get whipped for it. And in the USA we celebrate Lady Gaga… thank goodness. 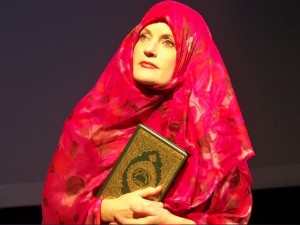 WM: In addition to being an actress, you are also a very talented a writer, how do you manage wearing both hats at the same time on a project like this?
JAL: These days, almost everybody I know is a hyphenate and does 2 or 3 or 20 things well and of course sometimes other things not so well—that’s one of the dangers of trying to do everything, so I am trying to keep it to a minimum. I started DTS as a non-fiction writing project and focused on the textual content as I did the necessary background research to better understand and depict my observations during the job. Later in the process, I realized I should consider performing it (as opposed to publishing it); then the writing changed to a more dramatic format and I started culling the visuals that would eventually comprise the multi-media components of the piece. Then I started re-writing, and re-writing, and re-writing some more. When performing the piece now, I resist the temptation to add new material right before I go on (unless it’s straight from a breaking news story). I did that at the beginning and it was too hard, I never knew what came next and I felt like I was on a terrifying ride with no idea how to ground myself as an actor. I don’t let that happen anymore and I believe my performance is probably much better as a result. I do, however, want to learn magic like my producer, Patrick Terry, so I can add that to my repertoire.

WM: How does your background in production development, affect your work as a writer/performer? 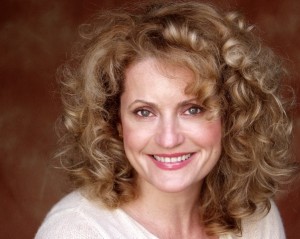 JAL: I know a good story when I see one and know that the power of a compelling story drives all good theater and film. My experience in development allowed for a free creative process. I’ve workshopped the play several times in many different settings including universities and theaters so I’ve received a broad base of response on what works and what doesn’t. Also, film development and production makes you a good collaborator—you simply can’t make a movie on your own, and I think that has probably made my play better by helping me to be open to input from others during the development process.

WM: When did you realize you could make your passion your career?
JAL: Luckily, I can’t separate the two or I would probably have gotten out of the business a long time ago. To be any kind of artist, whether it’s in film or fashion or food, requires great focus and concentration and then a helluva lotta luck and then maybe you can do what you want, sometimes. I love what I do and I am so glad that I’m able to do it.  I remember a teacher in grad school warning us to get out of the business if there was any doubt in our minds that it wasn’t absolutely what we HAD to do. I have to do this and I love it.

WM: Outside of the industry, what inspires you and keeps you energized?
JAL: My home base is Santa Monica and like everybody at the beach I do a lot of yoga and ride my bike whenever I can. I even won a snappy new ensemble from a favorite local yoga apparel shop because I’m on my bike so much. It’s the only prize I’ve ever won in all my life so I’m pretty pleased. I’m taking an ongoing writing course at Santa Monica College with a renowned writing guru, Jim Krusoe. He’s a generous and discerning professor and I like the structure of being forced to submit pages every week… makes you humble and productive at the same time.

WM: What can the Women’s Mafia make happen for you?
JAL: The interesting people who contribute and belong to the Women’s Mafia inspire me and I want them all to come to my next show on Monday March 29 and Tuesday March 30 at Galapagos Art Space in DUMBO. DRIVING THE SAUDIS always provokes a lot of cultural exchange and I have Q&As after each show so I can hear what people have to say. I hope everybody stays and chats!

“The story explores conceptions and misconceptions of beauty; it describes the challenges and expansion of my own world-view and ingrained Western beliefs; and it is a story that provokes cultural dialogue and exchange. Ultimately, it is an exploration of the subjugation of women in society—theirs as well as ours, and my complicity in that role.” – Jayne Amelia Larson
“It’s a story that sounds almost too incredible—the kind you’d eavesdrop in on at a restaurant. ‘The worst job I ever had,’ is how actress Jayne Amelia Larson describes being a chauffeur in Beverly Hills. Not just an ordinary chauffeur. But a driver for vacationing Saudi royalty. Larson turned her eye-opening ordeal into a biting solo performance piece called “Driving the Saudis,” …. partly a comedic recollection of being part of a 50-person detail of drivers who were to accommodate a major Saudi Arabian princess, seven additional family members and dozens of friends, nannies, secretaries and servants. Larson takes on the personas of her most memorable passengers: a teenage royal who insists on cranking up the stereo, a cigarette-smoking hairdresser on a gambling binge, and the self-important assistants who send her shopping for 27 bottles of hair remover. Behind the humor, however, is sharp social commentary that should leave every audience member questioning their car’s fuel efficiency.”- Memphis Commercial Appeal